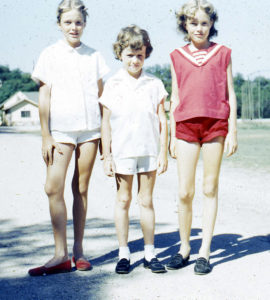 Honesty can be overrated.

In the 1950s, our parents sent their daughters to a “fancy” girls camp in Kerrville, Texas, where campers swam in the Guadalupe River, sang songs around a campfire, lounged under the trees in white Adirondack chairs, and had sessions that lasted at least a month. My twin Joanne and I first went when we were ten to “Camp Mystic” and were housed in a cabin called “Chatterbox.” At the first “campfire,” names of new campers were drawn from a hat in front of the entire camp and divided into two distinct “tribes,” Kiowa or Tonkawa. Much ado was made about the “tribes” and “tribe members” clapped whenever a camper was assigned to their tribe. Joanne was Kiowa, whose colors were blue and white and had a Thunderbird insignia, and I was a Tonkawa, whose colors were red and white with a buffalo insignia. Each Sunday evening just before dark, the two tribes gathered separately and set off in torch-lit single files to their “sacred” secret council site, on top of some hill.
For veteran campers, the big deal about Mystic was the collecting of “M” letters, each piece of felt given for the activity engaged in, such as archery, swimming, canoeing, golf and it’s successful completion. Seasoned campers proudly displayed their “M’s” thumb-tacked to the walls over their bunks, or sewn onto blankets on their beds. The number of “M’s” marked them as either an achiever or not, a kind of status. New campers viewed any collection of “M’s” with the appropriate awe, an unuttered message that it was REALLY BAD if you didn’t get an “M” for your activity. (There must be something “wrong” with you if you didn’t get an “M.”) More important than “M’s,” however, was the addition of each end of year’s “tribe letter,” a large felt red and white T or blue and white K.
The second summer we went to Mystic, Bonnie, four years younger at age 7, joined us. She was in the youngest cabin, “Twins.” Bonnie became a Tonkawa, my “tribe.”
The tribe letters and precious “M’s” were always handed out on the night before all the campers went home at the end of term. I remember that final night well. I recall gathering with the other Tonkawa cabin mates from my cabin “Look In,” in our white shirts and shorts, to solemnly walk single quiet file to our secret site to the beat of a drum and the flickering light of hand held torches, their flames giving the scene an otherworldly, “holy” kind of feeling.
When we reached the sacred circle, the older girls at the center all wore red headbands with white feathers and they seated each cabin group on the cut trunks of trees placed in a big circle around a bonfire. The “Chief,” a final-year camper (read that “big deal” high school girl) wore a full war bonnet of glorious feathers cascading down her back. The older girls in headbands all stood straight-legged, arms folded, solemn with the importance of the moment. We were silent while the bonfire at the center hissed and sparked, the uneven light making tanned faces glow, the only sounds hushed whispers and the beat of the drum. I suppose there were speeches, appropriately pompous. I don’t remember. I only remember my name being called alphabetically with my cabin and filing to the front with to be handed my “T”-shaped piece of red and white felt.
I had caught glimpses of Bonnie here and there and it was after the last name was called that I realized I had not heard her name. I looked around the “sacred circle” and every girl was holding her piece of red and white felt in a careful way…..all the girls except my precious sister. Bonnie, always so loving and open and smiling, sat by herself, the only little girl in white shorts and shirt with no scrap of felt in her hand. She seemed smaller and more vulnerable than I had ever seen her.
Final campfire completed, smiling and excited faces stood up, dusted their rears and lined up again for the trek back to the Camp. I tried to catch Bonnie’s eye. No “friends” were hugging Bonnie or even chatting with her. She just walked back as though in a trance, her brown eyes glittering with moistness. As we came down on the rock trail, I searched for her. When I saw her, she was smiling a cracked sort of smile, her auburn curls awry. I don’t remember if she was crying, but I cannot imagine she wasn’t. I hugged her and asked about the letter. She only shook her head and looked down, too emotional to speak.
The next morning, parents were waiting at the front gates in their station wagons and automobiles, a long line paralleling the Guadalupe. We left the camp as soon as we could, never to return….the shame of the previous night tangible.
Our parents told us after Mystic was firmly and forever in our rear view mirror that they had angrily and protectively gone to the head of the camp, who told them how “Proud we are of Bonnie because when she filled out the questionnaire (at the end of term) she answered the question, ‘Do you think you deserve your tribe letter? ‘No, because I talked during nap time.’” She went on to say Bonnie was the only one in camp who answered the question honestly. My parents didn’t know what to say to that self-important woman with all the power to shame and crush such a young spirit. My memory is that their response was something about how they had “rewarded” her “honesty” by making her the only camper who didn’t get a tribe letter. Shame on them.
Yeah. Honesty can be overrated.