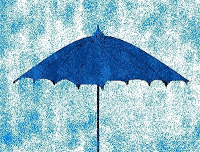 This story isn’t about my own beloved Tilly, it’s about another Tilly, a funny-looking terrier mix with a mind of her own and the ability to convince a family that wanted a chocolate Labrador retriever to take her home instead.

Jerry, the man who owns the hardware supply/lumber yard in our town came to the shelter believing he knew what he wanted. He said he was “just looking” for a dog for their family. He wanted a chocolate Lab.

In one of the back kennels was a female dog who somewhat resembled a multi-colored, wire-haired terrier-basset hound. She danced happily on her short legs whenever someone passed, her eyes bright with desperation and hope.

We didn’t have any Labs at all that day, but I told him he should just “try” the terrier/basset.  I was sure she would make a wonderful family dog. The people who had given her up said she was already spayed and housebroken…and good with children, a natural choice except for how odd she looked…and she wasn’t a Lab. I suggested he just try the terrier mix and if it didn’t work out, he could return her.

He took her home, and as predicted, the whole family fell in love with her. They named her “Tilly.”

Over the years, whenever I went to his business to get supplies for the shelter, we would discuss Tilly. He always complained about her, but it was in good spirit. He usually said things like he wished he’d gotten a Lab instead, that Tilly was a terrible dog and wouldn’t mind him at all. It was clear how much he really loved her, he just spun a good story for me.

Animal Control picked Tilly up occasionally, whenever they could catch her. She didn’t like staying in the fenced yard when no one was home and was most creative in escaping. Each time we got her, Jerry would come to the shelter and bail her out, wagging his finger and scolding her in a genial, cooing way to let her know just what a bad, naughty dog she was.

One night recently when my family went to dinner at a local restaurant, Jerry was there with his family. He came over to tell me that they had “lost” Tilly.

Like a lot of animals, she was deathly afraid of thunderstorms. The previous Friday, our county had experienced an absolute gullywasher, and Jerry’s family wasn’t home to let Tilly in. She had gotten out again and Jerry was called by Ronnie, a friend who owns the fried chicken place in town. The man, a normally business-like, stoic kind of guy, called from his cell phone to tell Jerry that Tilly had been hit by a car and he was there at the site with her.

Jerry drove there as fast as possible. The lady who hit her was still there also, sitting inside her car blocking the road.  But his friend Ronnie was standing in the downpour in front of the car, holding a blanket up over Tilly to keep the rain off. He was totally soaked.

Tilly raised her head a little to look at Jerry and tried to wag her bedraggled tail. Jerry asked his friend to call the vet and tell him he was on his way to the clinic with Tilly and for the vet to meet them there.  He carefully picked her up, hugged her close and laid her gently beside him in his car.

He stopped then in his story, his voice choking. He put his hand on my arm and said, “When I got to the vet’s, she was already gone. She was such a good dog. She was just perfect. I know I complained about her to you a lot over the years, but she was….just perfect.”

(note:  Names in this story have been changed-except for Tilly’s.)

One thought on “Tilly”