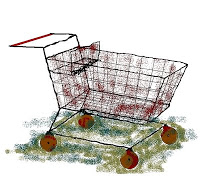 Animal shelters are rarely found in the best part of town.  Ours was no exception.  This “animal control facility” was on a triangle of land bordered by a railroad and a pit for gravel and tar.  The city barn was across the street.  The only nearby houses were lived in by people too poor to have any other choice.

Not long after I started volunteering there in the mid-1980s, I began hearing smatterings of stories about a small house up the street. The house looked to be about 500 square feet with all of those feet needing repair and paint. It had a small slanted front porch, just big enough for the two shabby cloth “Lazy-boy” recliners on it.

Passing by, I would see a very old stoop-shouldered woman who wore one of those old-timey sun bonnets tied under her chin. There was also a younger odd-looking man who wore strange clothing combinations and walked everywhere, always pushing a rusty H.E.B. grocery cart that he parked in their small back yard. They were the Clackers.

Annie, the animal control supervisor, made comments from time to time with the other officer about the Clackers, especially the man, Dwayne. The woman was his mother. Annie alluded to some mysterious thing Dwayne did that was too horrible to discuss. One day when none of us were too busy, I asked about him. She said he was mentally challenged and, “Dwayne does dogs.” What? I just stared at her. She repeated, leaning her head to one side and widening her eyes, “You know…he does dogs.”

“What? Why don’t the authorities do something?” Annie shook her head and said in a weary voice, “Adult Protective Services folks know all about him.”

On other days, I asked questions such as, “How do you know?” and “Isn’t that against the law?” The answers were unsatisfying. “You just know if you see the dogs.” And “No, bestiality isn’t against the law in Texas. Besides, you’d have to have a witness testify.” Conversation over. Don’t think about it.

But I did think about it….every time I passed that shabby little house or saw Dwayne pushing his grocery cart in his red double-knit pants and squashy-looking hush-puppy shoes. Worse, he would come into the shelter (a public facility) to “see th’ dogs, cuz I luv ‘em.” I just stayed away from him.

One day there was a commotion in the reception room and a scuffling noise. Dwayne had come in with a medium-sized brindle dog in his arms. The animal was struggling and scratching him. I asked him what he was doing with the dog. He said, “Awww, she don’t like me no more.” Oh geez, I thought, what now? “Are you turning the dog in to the shelter, Dwayne?” “Yeah,” he said, “I got scratches all over m’ arms. You oughta see m’ laigs.” No way did I want that image in my head.

I stepped forward and gently took the dog and walked back to an open kennel in the front kennel room. When I returned, I didn’t see him so I pulled out a release form, filled it out and logged the dog into our records. Later, I heard Dwayne’s twangy, nasal voice in the reception area. Apparently, he had been in the back kennel room. He was saying, “Ah thank ah want thet collie back thar in pen 27.”

I could hear Annie’s soft voice at the front desk replying.  “No, Dwayne, we’re not going to adopt a dog to you.”

Good. She was handling it. Annie was always direct and fair. I entered as silent support and watched.

Dwayne cocked his head, hung his mouth open and asked, “Why not?”  He looked like he was asking the world.

Annie looked straight at him and said, “Because your mother won’t let you.”

“Oh,” he said, accepting the answer, and left without saying anything else.

I congratulated Annie. She said he would never understand if she told him the truth. We continued working and about an hour later, the front door opened and there was Dwayne, his tiny toothless mother beside him in her bonnet.

Annie, who had been doing paperwork at the front desk closed her eyes wearily, then said, “What can I do for you, Mrs. Clacker?”

“Dwayne done tole me he wants a dog and hit’s okay with me.”

Annie shook her head, “No, Mrs. Clacker, we’re not going to adopt a dog to Dwayne.”

Both Clackers looked dumbfounded at each other.  Turning back, “Why not?” she asked.

I could hear the breath coming out of Annie. She lowered her head and her voice and said, “Because, Mrs. Clacker, Dwayne abuses dogs.”

The pair looked at each other again.  “Naw, naw, he don’t abuse dogs, he loooves ‘em.”

Annie, slowly and in a confidential manner, said “I mean, Mrs. Clacker, that he abuses them… sexually.”

This seemed to confuse both of them.  “What do you mean?” asked the woman.

Ye Gods!! Poor Annie was going to have to clarify. She rose from her chair, both hands on the counter, leaned forward and said in an even more confidential voice, “I mean, Mrs. Clacker, that Dwayne DOES dogs.”

The Clackers’ heads moved away at the same time, looked at each other in confusion, then the mother leaned forward, put her arthritic fingers on the front of the counter and said in a small voice, “Does this mean he cain’t have th’ collie?”

(Note: We didn’t hear from the Clackers again.  Nor did we learn what happened to them. One day, a few years later, they were both just gone, leaving the worn “Lazy-boys” on the front porch and the H.E.B. grocery cart in the back yard.)

( Note:  names are changed of all people in this story.  Also, I apologize for relating this tale to anyone offended by the subject – as I was.)