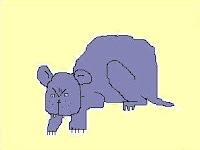 It was Christmas and our two youngest children each asked for a gerbil from Santa Claus.  I had gone to the local Wal-Mart to buy two, careful to choose different-looking ones so the children could tell them apart.

I asked the person in the pet department how to tell if they were male or female.  (I had been told to get two females so that we might avoid such questions as, ”Gosh, Mama, what ARE they doing?” )  She didn’t know.

So, late Christmas eve, in Wal-Mart’s fanciest cage, all the props and the two gerbils were set up and waiting in the living room for Christmas morning.  We happily went to bed.

My “peace on earth” smile disappeared when we came downstairs the next morning to see what Santa Claus had brought.  There was only one gerbil in the cage.  Of course, the kids didn’t know there should be two, so while they were happily exclaiming over their gifts, I was surruptitiously looking around for the Houdini gerbil.  Under furniture and in dark spaces.  No gerbil.  I grabbed every loose piece of paper as it was unwrapped to be sure it wouldn’t be thrown on the floor to provide a hiding place (and perhaps a squashing place).  Did I mention we also had a cat?

I wasn’t paying much attention to my husband who had been happily showing our daughter how to ride her new pink Big Wheel.  I didn’t notice what else he was doing.  Building a fire in the fireplace.

I heard a match strike and leapt towards the fireplace yelling, “No, Stop, Don’t light the fire.”  As he crouched with the lit match in his hand, there in the fireplace, sitting on a log was the missing gerbil.  Fortunately, he was easy to catch.  And I don’t think the kids caught on that we had “inside” Santa Claus information on how many gerbils should have been there.

We named him Smoky.

We soon discovered the many joys of gerbilhood.  Did you know they are nocturnal?  After a few sleepless nights listening the squeak of the ever-turning wire wheel, we finally removed it and put the cage in a bathroom and closed the door.  We also discovered we had two gerbils who didn’t like each other  that fought often with Smoky finally finishing off the blonde gerbil.  The children, horrified, found the blonde loser dead in the cage.  We had a little ceremony in the back yard with popsicle-stick crosses.

Smoky seemed happy enough without a roommate.  And there was less night-time noise.

At the end of the Spring school session, our son grinningly announced he had the privilege of bringing home the class gerbil to take care of for the summer.

So, we had two again.  Actually, the school gerbil, who came with its own cage, was sweet and friendly…unlike Smoky.

We stacked the cages in the bathroom, on a dresser next to a window, with the school gerbil in its own cage on top of Smoky’s.

A few mornings after the arrival of our guest, our son came down to the kitchen, eyes all goggly and red.  Smoky had somehow managed to kill the school gerbil during the night.  We needn’t have wondered why.  Smoky had already proved his prowess at being slippery and mean, somehow getting into a cage on top of his own.  He had accomplished his most impressive Houdini trick through the plastic bottom of the school gerbil’s cage and was again back in his own cage.  So to the backyard gerbil graveyard once more.  More popsicle sticks.

Oh great!!  What were we going to do now?  Back to Wal-Mart, searching for a twin to the deceased gerbil.  Maybe the teacher wouldn’t notice the switch???  I found one…the only one that looked the part.  Only this one WASN’T friendly.  In fact, it bit the store employee when she tried moving it to the take-home box.  She asked, “Are you sure you want this gerbil?”

We were never able to handle the replacement and he/she never got friendlier, but at least it was alive at the end of the summer to be returned to the classroom.  That left Smoky alone again.  He seemed to like it that way.

One day, he wasn’t looking right so I took him to our veterinarian.  She looked at him and asked how old he was.  I told her I really didn’t know but we had had him 2 ½ years.  She wanted to show me something.  She left the room and came back in a minute with a book.  She pointed to a page that said the life span of gerbils was about two years.  She said, “He’s a really old gerbil.”  Soon another life lesson for the children at the popsicle-stick graveyard.

There is a moral to this story….maybe many morals.  One of them is to not get gerbils as pets for your children unless you are prepared to teach them that gerbils won’t live forever.