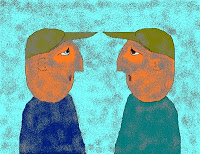 Our dad, James Tinkle West, didn’t often talk about his World War II Air Force experience.  He was like many veterans in that way.  One story, however, he did talk about with equal parts embarrassed laughter and regret.

Dad was an instrument trainer at the Army Air Force base in Independence, Kansas during “TheWar”.  (He always said both words as one.)  He had trained at Kelly and Randolph Fields in San Antonio and was proud to have authored the Air Force’s official instrument training manual.  He stayed in the states, training so many other pilots to fly in foreign countries, pilots who were his friends and didn’t return after the war was over.

Being an Air Force pilot was a life watermark for him.  He was a “WWII pilot” all his life.  When remembering, he would hold his hands up as though there were an invisible steering wheel in them, leaning this way and that… always with a smile and a faraway look.

After “TheWar” was over and he returned to civilian life with our mother and his two baby daughters, Dad continued his love of flying.  Having had her share of worry during the war years, our mother, Lois, had asked him not to get an airplane himself, ….but, of course, he had friends who did own them.

Jack was one of those friends.  He and Dad spent many happy hours flying together.  Jack’s airplane, a two-seat, single-engine type, was conveniently parked outside our town at a small strip airport that had only been heavily used during “TheWar,” when a prisoner-of-war camp had been located near there.*

Another war presented a formal opportunity for the two pilots to take off in the call of duty.  The parents of a soldier killed in Korea asked Jack and Dad to take their son’s ashes up and sprinkle them over their farm.

They met one morning on the strip tarmac and the parents gently passed them the urn.  Jack and Dad took off towards the farm area leaving the parents waiting for their return.

As they approached the target area, Dad carefully removed the top of the urn and prepared to open the passenger door of the small plane.  Leaning the urn over, he cracked open the door.  A whoosh of air filled the cabin and swept up the ashes.  But, instead of taking them away toward the farm below, many were sucked back into the cabin.

Jack and Dad covered their mouths and yanked off their dark glasses.  The lenses were covered in grey.  Worse, the inside of the windshield was obscured.  Dad wiped off enough of the ashes for them to see where they were going, then they turned toward each other.  They looked like two raccoons, with only circles around their eyes free of ashes.

They were laughing too much at first to comprehend the full horror of their situation.  How could they possibly return and face the soldier’s parents?

They radioed a nearby airfield and asked them to call their home field to tell the parents their return would be delayed and for them to go home and not wait.  They would deliver them the empty urn as soon as possible.

They hoped a fellow soldier would forgive them.

*A little-known fact is there were many military prisoner-of-war camps spread throughout the nation.  The one in Mexia, near our town, held both German and Italian prisoners.  They were lightly held and allowed to work for local people.  We met one many years later in 1966 in Vienna, Austria.  He was the taxi driver who drove us to the hotel from the airport.  He recognized our Texas accent and asked where we were from.  He overflowed with joy when we told him Corsicana and couldn’t stop talking about his experience in the Mexia camp.  He memorably talked about the white bread baked in Corsicana and delivered to the camp.  It was nothing like the German brown bread and they all thought it was cake.  He said his time there was the best of his life.  Remarkable to have that sort of memory about being a prisoner
.

2 thoughts on “Ashes To Ashes”