In a small town, gossip is an enthusiastic social activity. Topics surround, naturally enough, religious no-no’s. The forbidden. Whispers about who is having an affair, who is an alcoholic, who has a violent marriage, who has come into money and so many more off-color subjects, truth often getting lost in the embroidered story.

Scandalous stories from my youth include the well-known town doctor who jumped out the window of a woman’s house naked and was shot on the way down through both cheeks of his bottom by the woman’s husband. (The doctor walked to work for months.) The wealthy man in town who died in bed in a Dallas hotel with a prostitute while his wife waited at home. The grandson of a millionaire who “blew” all his inheritance on schemes to benefit his high school friends. Newer rumors, like the tale of the son of a prosperous family who murdered his wife to take up with the babysitter..and got away with it.

A friend recently told me how horrified his mother was when someone began a rumor in their town that his mother had false teeth. Good grief!! The tale only stopped when she directly confronted a known source and proved through yanking on her own beautiful teeth that they were not “choppers.” Ridiculous.

The most public scandal from the past concerned our town’s only Texas governor who died while in office, on a train with a prostitute. The woman had to be put off the train at the next station in an effort to avoid people finding out. People, being people, however, did find out…..and duly reported the story…..and reported the story…even 50 years later.

A “book” written by a local young man during the years of World War II was said to name many of the day’s local “sinners.” My father said the book had named the perpetrators. Others’ names were lightly veiled. The social game at the time was deciding who the unnamed people were, or so my parents told us. Scintillating stuff to a young mind.

I had heard about the book as had most everyone in both my parents’ and my generation. The book had been publicly condemned at the time (although privately popular) both because it was not considered good manners or “Christian” to speak of such things and because, many said, it was…quite simply…not a good book.

My parents didn’t have a copy so I never saw it. It’s one of those memories that goes into deep storage after reaching adulthood. I didn’t think about it again until 1985 when we moved into a house that had been built by the uncle of the author. Hmmm. My mind wandered a few times toward the book.

Years later, about 2010, I was searching on-line for a book about my home town when Wow….there was the “scandalous” book. On my screen…the name with no photo of the book. A used copy for only about $5.00. I ordered it and waited.

One day, a slim envelope was in my mailbox. What? I waved the floppy envelope back and forth. It was practically the size of a letter. There must be some mistake.

Inside the envelope was a thin, eight page half-sheet publication, more booklet than book. On the cover was the title. Sure enough, there was his name. And the name of our town. Wow. This is it?

The small folded booklet was apparently a poem. A POEM??? Well, it certainly wouldn’t take long to read.

Some of the folks were right. It wasn’t great literature. But, applause to the author for publishing it, I thought, admiring his audacity. Inside were names I recognized. He was kind to some, dismissive to others and bluntly rude to a few.

I couldn’t help but be disappointed by both the lack of scandalous detail and also by the abbreviated length of the book. In any case, the revelations were thuddingly blah so many years and so many world changes later.

I silently spoke to my parents’ spirits, “This is what all the dust-up was about?”

Most of the time, rumors are directed at secret guilt and desires. They involve jealousy, not envy and are never kind.

That book, like life for me, is a journey in humility, a lesson in unimportance. What seems so critical one day is microscopically insignificant later. 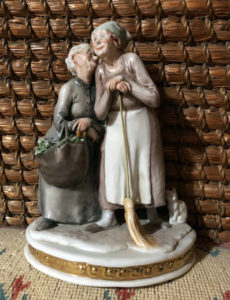