A story printed in 1920 in the Corsicana Daily Sun satirically recounting a trip made by local Hella Shrine families to Portland, Oregon. (My own great-grandparents, Bige and Molly Tinkle were among them. The photograph was taken on the trip at Pikes Peak, Bige sitting front left, Molly second row in white.) 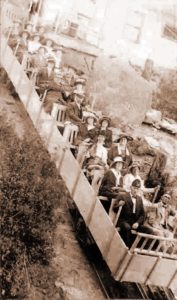 Written by Mrs. Frank P. Wood and read at a dinner party given by Mr. and Mrs. Murchison on December 18, 1920, Corsicana, Texas