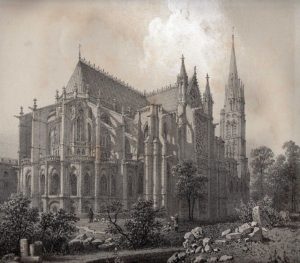 This is a bare partial manuscript of a story written by my mother while a journalism student at SMU in the 1970s. I have searched and have been unable to find more of the manuscript. She titled it “PALE DEATH.” I believe it would have been a thriller. We lost her and the story’s ending in 1992.

The cathedral was cold, colder even than the recumbent stone effigies of French kings and queens which stretched out in endless succession like casualties after a battle.
I saw no other visitors in the dim interior, but this did not surprise me. Tourists do not usually choose the month of January to come to Paris, and Parisians are far too sensible to risk pneumonia by traipsing around drafty cathedrals.
Saint-Denis had beckoned to me like Mecca since the French Civilization course I had recently finished at the university. Unaware of its significance, I had never visited it on my trips to Paris in the past.
Tourist agencies do not usually include it in their packaged tours of Paris as it is rather inaccessible. To get there I had to take the Metro at the Place de la Concorde, change at La Chapele, then transfer to Bus #156. It seemed to be filled with working people returning to their homes, but an elderly man, who still retained an appreciative eye for a young female, arose and with a gallant gesture gave me his seat. On this rickety, swaying vehicle I finally arrived at the small, industrial town of St. Denis on the outskirts of Paris.
The bus driver let me and two other passengers off across the street from the cathedral, but I was scarcely conscious of them. My eyes were on the cathedral. Its one remaining spire soared over the site where a chapel had been built in the fifth century over the grave of Saint Denis, supposedly at the urging of Sainte Genevieve, the Protector of Paris, who is credited with saving her city from being ravaged by Atilla the Hun.
Soft, furry snowflakes began to fall from the low-hanging clouds and although my vision was blurred, I could still hear the staccato voice of Mme Venture relating to my class the bloody history of Saint Denis, the first bishop of Paris.
According to legend, as I recalled, he and his two companions, Eleutherus and Rusticus, found the Roman gods offensive to Christianity and tried to destroy the temple of Mercury which had been built on the highest point in Paris. All three were summarily beheaded for their efforts on the order of the Roman governor Sisinnius. Historians agree this occurred around the middle of the third century. This mount of Mercury was to become the “mons martyrum,” which today we call Monmartre.
In my imagination I could see Saint Denis pick up his severed head and walk with it until he met a Christian convert who buried him in secret. All three of these pioneers of Christianity now lie under this edifice which became the burial place of French kings and queens.
The biting cold urged me from my reverie and sent me racing inside. Even in the dim light, I was able to make out the prayer of Saint Denis engraved in the grey stone above my head:
“Seigneur, benissez cette nation que vous avez choisie.”
Being a francophile, I silently agreed with Saint Denis that France was a nation chosen by God, but didn’t linger over the prayer. The tombs were what I had come to see.
With mounting excitement I made my way through the murky light which came through the stained glass and finally found the tomb of Dagobert I, the first French king to be buried there.

The cabbie pulled up to the corner of Chancery Street and Portugal Lane and stopped. I fumbled through the unfamiliar English coins until I finally hit upon the right combination. Opening my umbrella through the opened door was nearly as difficult.
Without turning his head, the cabbie pointed to imposing iron gates on my right and said, “Office of Public Records, Miss.”
Behind the gates loomed dark building huddled together as if for warmth in the cold rain. I was thankful for my boots as I sloshed through ankle-deep water. The guard at the gate directed me to a second guard whose quarters were located inside the first building on the right. I entered thankfully.
“Name?”
“Medora Lowell Clark.”
“Purpose?”
“I am a university student and want to do some research for a paper I am writing.”
At that he stared at me as if trying to guess my age. For proof, I handed him my Student ID Card with photograph attached. This seemed to convince him.
“Hmm…American, I see. Now your passport, please.”
I noticed he flipped first to my vital statistics, then glanced up at me again. His thoughts he kept to himself. While he was busy filling out the required forms, thoughts like confetti swirled in my head, thoughts of the chain of events which had brought me from Dallas to London. A year…so much had happened to me during the past year.