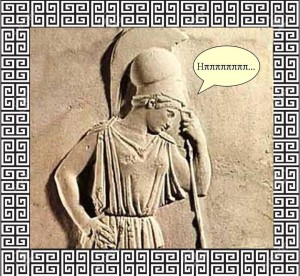 A hot summer day spent climbing over ancient Athenian ruins in 1964 became more uncomfortable back in the air-conditioning of our hotel. After the five of us had dragged in, showered, washed the sweat out of our hair and put on pajamas, we ordered sandwiches and sodas up to our room. None of us had the energy to go downstairs to eat. While sitting around the too-small table, we were startled by an unexpected phone call. Dad got up and answered it.

Clanging down the receiver, he turned to our four questioning faces.

“I can’t believe it,” he reported. “The woman on the phone said, in a British accent no less, ‘This is Eleanor. I’m downstairs and I’m ready.’ Then she asked to speak to ‘the prince’. I told her there was no prince here, just my family. Then, she started yelling at me and called me an imposter. What.. in.. the.. world?”

Mama reacted quickly. “You’d better call the front desk and tell them not to let that woman upstairs. She sounds dangerously crazy.”

He picked up the phone again and pressed the concierge button. “Hello. This is room____. A woman just called our room and said she was downstairs and looking for some kind of prince, called me an imposter, demanded to speak to whomever the prince is and was yelling at me. We don’t want her to come up to our room. … Yes, thank you.”

Within a few minutes, we heard a soft knock and a low voice at the door. “Mr. West, it’s the concierge.”

He came in and explained why our room hadn’t been ready when we arrived and why we had been kept waiting all afternoon. It was due to an Arab prince, he explained, one of the brothers of Saudi Arabia’s King Faisal, who had refused to leave the room and they had to evict him then clean up a massive mess afterwards. He said it was a bad experience not only for us but also for the hotel, and apologized. It was his guess that the woman had come to visit that “prince” and was angry he was no longer here.  He soothingly added that although she had gone away angry, we were not to worry. He assured us she would not disturb us again.

With the drama settled we returned to our sandwiches. Then, exhausted went to bed.

A month or so later, back home in Texas, Dad got a letter from the hotel manager. It said that after we left, some “jewelry” had been found under a bed and if we would write and identify it they would send it to us. We discussed whether any of us had bought a bracelet or something inexpensive from a street vendor, but none of us remembered missing anything. So, Dad wrote back that his wife and three daughters had all bought souvenir jewelry while traveling and we didn’t know if any could have been left behind.

Could he kindly describe the jewelry further.

Instead of a letter, a package arrived a few weeks later along with a note. The hotel could not keep the jewelry and they were sending it to us.

Inside the box was a necklace and a ring. The necklace was a large teardrop bloodstone held by three long diamond prongs at the top. The ring was blue cloisonné on gold with small diamonds at the center. We had never seen them before and they were clearly not ours.

Dad immediately wrote back that the jewelry was not ours and to what address should he return it.

The manager wrote again and said we should just keep it as ownership was impossible to determine.

Although uncomfortable with keeping something that didn’t belong to us, especially somewhat valuable jewelry, we struggled to understand the situation. We decided the jewelry had likely been the angry woman’s “pay” for being with the prince, whatever her services. (And believe me, none of us wanted to know what they were.) We now realized why she was so furious. He didn’t pay her. And now her “pay” was in Texas with the “imposter’s” family.

Mama wore that jewelry many times until she died. After her death, Dad sold the necklace and gave the ring to my daughter, whose finger I saw it on last week. I never saw that lady, but I am sure the ring looks much better on my daughter’s hand than on hers.