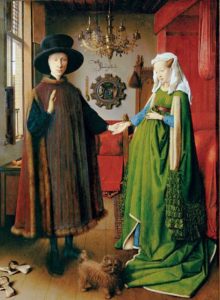 For many, so many years the women of the Tribe of Man had one purpose. It was to marry and produce offspring for their husbands. The wives had no riches of their own as they gave their youth and riches to their husbands. So it was the lot of the wives to obey their husbands, to whom they had given their power.
What the wives did not know is that they had kept a power for themselves. Hidden inside each wife was a secret power. Because the wives themselves did not know they had the secret, they obeyed and willingly gave themselves to their husbands. But the husbands never fully gave themselves or any of their power to the wives. For the husbands, it was their right to keep the powers and use them as they wanted. In this way, the wives of the Tribe of Man were told they were not as important as their husbands. And both the husbands and the wives accepted this as truth.
So, the wives had to learn to be blind. For century upon century, from the beginning of time, it was the case that wives had to tell themselves to be blind. Their secret was still hidden in them.
At last, wives began to talk with wives, and women began to talk with women. They wondered why it was so that they had given their power away and believed they were not as important as their husbands and men. There were no good answers. So the women looked deeper inside themselves and some eventually discovered their secret. It was these women who were considered outcasts by the men and even shunned by some women. It was feared that these women would share the secret and tell women and wives that they themselves also had the secret. In this way, many women discovered their own secret within themselves.
The secret that women are more powerful than they’ve been taught.
The discovery of the secret upset the timeless balance of peace among the Tribe of Man. After all, if women had power, men believed power was being taken from them. The men were not willing to share power with women. The women were told to take only what the men gave them. But many women knew the secret and were unwilling to settle for the men’s scraps. The women rose up and said they would no longer allow men to control their lives. For this the men punished the women severely. But the secret inside the women would not be extinguished. Together the women asked WHY.
Why did they have to accept blindness? Why did they have to obey men? Why could they not control their lives and those of their children? Why did they have to accept their husbands lying with other women? Why could they not be leaders of men? Why could they not share equally with men? There were no answers acceptable to the women because the men had no acceptable answers for them.
Because men were bigger and physically stronger? Because that was the way it had always been? Because women were not as important as men? Because men were different? Because they could?
Why were the hardest jobs, those of family, given to women? Why is it the Tribe of Man and not Man AND Woman? Why is God a man and not a woman?
The secret did not have any answers except for each woman’s blindness. Only each woman could decide whether being blind was better. And if not, how could she learn to see.