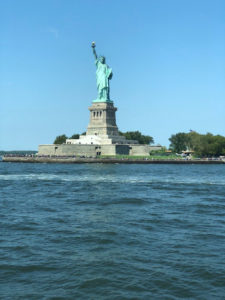 As my 75th birthday present, my sister-in-law gifted me airfare to join her in New York City. Her instructions, sent by email, were to take an Uber to the downtown hotel. I had heard often of Uber but had never used it. When I emerged from the JFK terminal, a man came up to me and asked if I wanted Uber. I said yes. He took my suitcase and led me to a large black SUV parked at the taxi curb.

I was congratulating myself on how easy it had been to navigate the unknown Uber, and what a nice vehicle he had. I asked how much the ride to the hotel would cost. He said it was the “usual Uber cost, set by the company.” As we drove into the City I asked my driver about himself. He said his name was Ali and he was from Pakistan. I had never been there and one of the few things I knew about Pakistan was that it was the Muslim half of the original country of India, a place I had visited. (Pakistan had been created in 1947 as part of Britain’s old Indian Empire so Muslims would have their own homeland and the Hindus and other religions would have India.)

I asked how Ali got into Uber and he said he rented the SUV for $500 a day from “the agency,” whatever that was. I asked how he liked living in the U.S. He said he liked it very much and his whole family was here.

When the City of New York came in view, I looked for the new World Trade Center on the skyline. The last time I had visited New York, there had been only a smoldering hole. He pointed out the new building to me. Then he said, “What do you think about the World Trade Center?”

“What do you mean? The new building?”

“No, I mean what happened that they blamed on the Muslims.”

“What? I don’t understand.”

“Don’t you think it was all an American conspiracy?”

“Don’t you think it was an American conspiracy orchestrated by the Bush people? They just blamed the Muslims because they were on the airplanes.”

“But Osama Bin Laden took responsibility. What about the phone calls from the third plane that described the Arab men talking about Allah?”

Ali went silent and we rode the rest of the way to the hotel that way. At the hotel, he said he was stopping before we got to the main door and wanted me to pay. He punched numbers into his phone then told me it would be $165 plus tip. And he preferred cash.

I was stunned. I had brought only $300 in cash with me and asked why it cost so much. He said that was the usual rate for Uber and he would send me a receipt electronically. I gave him my email and paid him $165 with no tip. And I never got a receipt either, by the way

No wonder Ali likes living in America. Here, he has found enough trusting travelers to provide him a livelihood 100 times better than he would have in Pakistan.

Some days later, I returned to JFK for my flight home in a hotel transfer mini-bus. The cost was $20.

So,maybe Ali was right. There might have been a conspiracy after all, only against unwitting tourists.

3 thoughts on “Taken for a Ride”