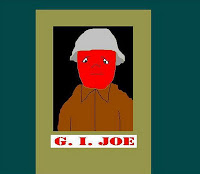 Years ago, G. I. Joe and his military buddies were a passion of our oldest son West. He memorized vehicles, accessories, weapons, outfits, uniforms advertised in magazines and on television and carefully collected each branch of the armed forces.

One Christmas, he asked for a G.I. Joe parachutist. It was the only one on his list.

In those pre-internet days, we all “let our fingers do the walking,” using the yellow pages phone directory. The only way to find a store that had what you wanted was to call and ask. Or…you could drive to each possible store and go in and look. A tedious process. By about the fifth call I located a store that said they had the right Joe.

On arriving, I realized it was the kind of store that displayed one of each item with a number. You wrote the numbers of items wanted, paid at the check-out line, took the receipt to an attendant and waited for the order to come down a conveyor belt. The loudspeaker would announce your number when your order was ready.

I found the G.I. Joe that West wanted in one of the showroom cases, carefully copied the number, paid at the register, then went to the delivery area to wait.

At last, my number was called. My purchase was in a sack, so I opened it and looked to be sure it was correct. Sure enough, the label was clearly printed. Inside the clear plastic window of the box, however, was a black G.I. Joe parachute man. Such things would not ordinarily matter except West had shown me a picture of what he wanted and that one was not black.

I approached the busy attendant, who was also black. “Excuse me. Um, my order is not the same G.I. Joe as the one in the display case.”

She checked the ticket and looked in the bag. “It’s the parachute G.I. Joe. Is there something wrong with it?”

She took the bag and I followed her into the display area to see the case.

She pulled the Joe box out of the bag, held it up next to the glass case and said, “This is the same one.”

Sheepishly, I said, almost in a whisper, “Well, the one in the case is not exactly the same.”

She looked at the case and the box next to it. “Oh.”

She strode briskly back to the delivery area, box in hand, reached up to the microphone and announced over the loudspeaker, “Lester, the lady down here doesn’t want the black G.I. Joe. She wants a white one.”

By this time, the many customers and employees in the area were looking at me, or at the attendant or at their shoes. I was also looking at my shoes, trying not to feel the hot flush rising out of my collar and wishing I were invisible.

Once home with Joe, I wrapped him and put him under the Christmas tree. On Christmas morning, when West opened his gift, I told the family the story about the purchase. His only comment was, “Well, you should have kept the black one. It’s more valuable.”

There’s a lesson in there somewhere.

One thought on “A G.I. Joe Christmas”