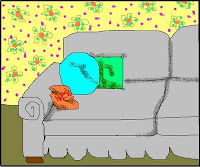 The call came in for Animal Control.  The hospital reported that a cat had bitten a child rather severely.  Because any animal bite is a public health matter, animal control officers are required to investigate.  Texas at the time was under state quarantine for rabies (which was a little known – very little known – fact).*

The animal control officer Annie started her search for the cat with the area of town where the bite occurred and where the child lived.  It was drudgery – going door to door, getting people to open the door, then explaining what she wanted to blank stares.  No one seemed to know anything about the cat in question.

After going to about eight houses, Annie went to a small yellow house with a front porch.  The screen door was closed, but the door itself was open behind the screen.  She knocked.  She knocked again.  “Hello?  Is anyone home?”

Thunk, thud, thunk, thud.  The sounds were approaching from the back of the house.  Soon, a woman on a single crutch and a single leg came into view and up to the front screen.  “Yeah?  Whutta-ya-want?”

Annie explained she was looking for a yellow tabby cat that bit a child.  “Oh, thet sounds like my cat.  I’ll show ‘er to ya.  Come in.”  She unhooked the screen door and gestured with one hand for Annie to enter.

Inside, the first thing Annie saw were three prosthetic legs lined up, “standing” against the low coffee table.  One had a tennis shoe and sock on it, one had a black tied shoe and one had a foot that wore a high heeled pump.  Annie glanced at them then asked, “Uh, where is your cat, ma’am?”  (Best not to mention the legs.)

“Why, she’s rat there on th’ sofa.”  Annie looked.  There was nothing she could see on the sofa except a few odd throw pillows and a tan H.E.B. plastic grocery bag.  “I’m sorry, Ma’am.  I don’t see a cat.”

“Well…she’s rat there” pointing irritatedly to the plastic bag.  “Aint she purty?”

Okay….real people truly ARE odder than fictional characters.  At least Annie didn’t have to worry about quarantining that cat.

*As a side story, the state-wide quarantine was a response to some grey foxes from south Texas being delivered to Missouri for a “canned hunt.**”  Those foxes turned out to be infected with the rabies virus.  Rabies is a fatal disease for humans as well as all other mammals.  (I’d like to think it happened to stop cruel canned hunts.  It didn’t, of course.)  Missouri demanded action, blaming Texas instead of their own incredibly loose or non-existent animal protection laws.  The publicly unknown – not unpublicized – “quarantine” and aerial bait-dropping were Texas’ answer.

**A “canned hunt” is organized to kill a specific prey that has been put in the area just for the hunt.  These animals have usually been raised in captivity or cages.  It is legal in some states to kill an old circus tiger or a zoo animal that the zoo doesn’t want anymore. “Hunters” (a term I use loosely) pay a great deal of money to kill these animals.  (There is film of a bunch of “hunters” shooting a zoo panther released from a cage, who was shot under the truck where he had crawled for safety.)  Texas finally outlawed canned hunts involving any mammals except hooved (deer type) and feathered animals (cage-raised game birds who have never flown).  Of course, a law (no matter how good) must be enforced, which is an even bigger problem I won’t go into here.