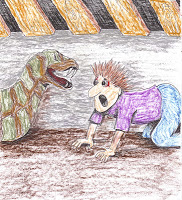 Snake stories in Texas are hardly rare.  One story, however, deserves recounting.

A caller to the shelter said she had seen a “huuuge” snake go under their house.

With its large front porch, it was the only home remaining on a corner intersection that had yielded its other residences to two filling stations and a quick-mart store.  The animal control officer investigated and decided because the snake couldn’t be found, even after somewhat exhaustive searching, that it likely posed no danger.  Snakes, after all, avoid people whenever possible.

The story should have ended there.  It didn’t.  The dispatch call had been sent on the police radio band, and local media who monitor the frequency picked up the “news.”  Witnesses and residents were interviewed and the town newspaper and local radio station reported details.

The “huge snake” was acquiring great importance.  Someone suggested asking a herpetologist at the college to confer.  He could surely decide what sort of snake it was.  After checking out the situation, the herpetologist deduced it was likely a large rat snake.  He was asked if it could possibly be a large boa constrictor or python.

Well…yes…since no one could exactly describe the snake, it could, indeed, be ANY sort of snake.

I note at this point that if such a large snake were exotic, it would be worth a lot of money which, unfortunately, the expert also mentioned.

So residents, as well as their friends and neighbors, began digging under the house to find this valuable snake.  (It didn’t seem to occur to the diggers that their digging could possibly result in a face-to-face encounter with a giant snake.)  The digging went on all afternoon.  Rubberneckers came and set up folding chairs across the street to watch the action.

I wasn’t aware of these developments until going home from the shelter that evening.  As I passed the parking lot of the quick-mart, there were beach umbrellas and people with coolers next to their aluminum folding chairs.  Men were standing around in gimme caps animatedly discussing the situation.  All were watching the excavating across the street.  There were large piles of black dirt and busy diggers were chest deep in their trenches.

Spying a familiar face among the spectators, I turned in at the quick-mart, got out and asked, in an innocent tone, what they were watching.  The woman I knew and several others around her started talking excitedly about a snake the size of a man’s upper arm.  Or…maybe the size of a telephone pole.

“Really?” I said.  “I don’t think I’d want to be anywhere around if a snake that big were in the vicinity.”

“Why do you think we’re watching from over here?”

Okay.  I backed out and went home…shaking my head.

When I passed the intersection the next morning, some of the spectators were still there watching from the quick-mart parking lot.

The snake was, of course, never found, although the old house had to have the porch supports and front sidewalk replaced after they sagged into the excavations.

The snake story slowly faded from town memory.  Some years later, however, I was reminded of that snake when another town crisis developed.

I was having lunch with shelter employees when a local woman who had a reputation for being on the nutty side approached me with a wad of papers in her hand.

“Have you heard about the rendering plant coming to town?”

Her eyes widened behind her large glasses and she leaned forward, rapidly telling me how a rendering plant was a factory where people drove unwanted horses to be cruelly killed and “rendered” into…whatever.  Yikes.  I don’t know if I was more repelled by the story or by the woman.  She pushed the papers at me and asked if I would sign her petition to oppose the plant coming.  Partly to escape from her, I signed.

Weeks later, my husband came home and told me he had been hired to represent a man whose business was … rendering plants.  (Uh oh, I thought guiltily.)  He continued, telling me his client had signed an agreement with the City, purchased many acres of land south of town and spent a great deal of money on the project already.  Then he told me his job for the man was to mitigate local criticism that had arisen to the project.  I admitted I had signed a petition and why.  I told him what the woman said about the horses.  He told me that it was just a wild rumor and the actual business of the rendering plant would be to process used frying grease from restaurants.  They would create many products out of the old grease and would employ over 30 local people full time with benefits.  It was a good deal for our town.

Well, that was certainly a different story than that woman told me.

Through personal experience, I’ve learned that when a person reaches a conclusion in an illogical way, they cannot be reasoned with.  This woman was on the unreasonable side anyway and I began to see “Letters to the Editor” on the subject in the local paper and opposition to the rendering plant began to gather speed.  Suddenly, this previously unimportant woman had people listening to her.  She had a “cause.”  And she beat her drum ceaselessly.

I spoke to people I knew about the truth of the rendering plant, but we were clearly in the minority on the subject.  So, I decided to write my own “Letter to the Editor.”  Naively, I thought that surely, if the truth was clearly explained, people would understand their mistake.  In my letter, I compared the overblown rumors about the rendering plant to the rumors about the “huge” snake that was never found and that kept getting bigger and bigger as time and the story went on.

(Note to self:  people don’t like being told, however gently, that they are mistaken.)

I did not expect the barrage of criticism unleashed by my letter.  Suddenly, the “Letters” page was expanded and angry letters were published saying my snake metaphor was “perfect” and accurate…because…the rendering plant, like the Biblical snake was “evil.”  Good grief!! I was also getting phone attacks at the shelter and at home.

The truth had shrunk to an unimportant, miniscule rumor.

My husband and the City arranged a public meeting at the high school auditorium to “explain” to people their mistaken ideas about the plant.  I stood at the back of the auditorium while people yelled at the owner of the plant, my husband, the Mayor and the City Manager.

I’m a fairly brave person but I was becoming worried about my family.

The end of the story is that the town elders bowed to the angry unreasonable element of our town, the people yelling, and paid off the owner of the rendering plant, losing in the process both jobs and future revenue for the city and county.  Additionally, people from her district even elected to the city council the nutty woman who started the whole thing.  (Of course, in a very short time, those same people came to regret their choice.  …we all did.)

My mother used to quote:  “A man convinced against his will is of the same opinion still.”  As with small town giant snakes and demonized rendering plants, it seems people will believe what they want to believe whether in religion, in politics or in fairy tales.