In the old Hebrew Cemetery in Corsicana, Texas is a headstone with only two words on it, “Rope Walker.”

Almost nothing is known of the man in the grave except the manner of his death.  It is a tale of physical bravery and emotional mystery that has endured  for well over a century.

What is known is that he came to Corsicana on a hot day in 1884 to perform at the grand opening of a store.  The town was bustling with new stores and businesses opening, each trying to outdo the last.  This one was Meyers and Henning Dry Goods Emporium.

M & H was on Beaton Street, the main artery of downtown Corsicana.  “The biggest shovels to the biggest bodices” had been written on the front of the store, whose proprietors had hired the man to perform a spectacular stunt to draw customers to their grand opening.

The Mayor of Corsicana was there and a band was playing.  The stunt had been advertised widely by M & H as an “astounding, astonishing, amazing, unbelievable, never seen before or ever again act of strength, gravity and defiance of common sense.”

It was a tragically accurate description.  The man would walk a rope strung across Beaton Street from the second story of M & H catty-corner across the 5th avenue intersection to the roof of Jackson’s Saloon and Gentlemen’s Relaxation Salon.

What made the feat more astounding was that the man would walk the rope with a full-size cast iron stove strapped to his back.  In addition, he had only one leg, the other being a homemade wooden peg with a rope-sized slot in the bottom.  Word had spread and the crowd gathered for the noon event to listen to the Mayor and the band… and to watch the death-defying entertainment.

Capt. J. A. Townsend’s school had been dismissed so the children could attend, which swelled the crowd even more.  They all waited in the dusty streets and on the board sidewalks for the excitement to begin.

The band struck up, the Mayor cut the red ribbon and the cheering crowd looked upwards, awaiting the unbelievable feat.  The rope was tightened and the man, wearing a sky blue uniform and seemingly relaxed, bowed to his audience from the roof of M & H.  After all, he had performed the trick many times before.  After motioning with his hands for complete silence to aid his concentration, he waited while two strong young men hoisted the heavy stove onto his back and strapped it tight.

The crowd hushed as the walker began to gingerly test the rope with his good foot.  Then he moved out, putting all the weight of man and stove on the rope.  Using his peg leg on the rope for balance, he moved slowly toward the center, smiling widely to his audience from over 20 feet above them.

He had the full attention of every eye.  As he reached the center of the rope, the end tied to Jackson’s Saloon suddenly slackened and he lost his balance.  In a horrifying moment, he fell and the stove fell with him, crushing his chest.

The shocked crowd rushed toward the crumpled man and several townsmen carried him to the Molloy Hotel around the corner.  Dr. Gulik  was summoned to assist, but little could be done.  The man asked for a Methodist minister and Pastor Abe Mulkey, came and prayed with him.  The man lingered in great pain and that evening asked Dr. Gulik for “a Jew man.”  As Corsicana had no rabbi, the owner of a downtown grocery store, Bernard Simon, came to him and the man painfully whispered prayers with him in Hebrew.  He would not reveal his identity or history to Mr. Simon.  The only thing he supposedly said, also in perfect Hebrew, was to ask that he be “buried with my people.”

Whether he told anyone his name is unrecorded and lost to history.  He was buried in Jewish tradition the next day in the Hebrew Cemetery and a stone was erected saying simply “Rope Walker.”  Although Corsicana citizens tried many times over the years to locate and inform his family, no one was ever found.

Today, both M & H and Jackson’s Saloon have been gone for over 100 years.  The stone for the unknown acrobat, however, still stands. 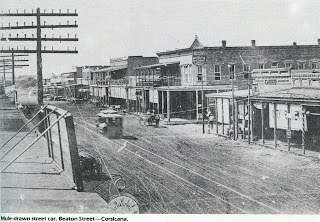 Notes:  This story was compiled from three sources:  1) William Rabinowitz’s 2003 re-telling of the words of his grandfather Hyman Tikvah Rabinowitz, who was a traveling salesman and claimed to be there that day, 2)  A 1936 Corsicana Daily Sun interview with Rachael Mae London, who as a child was an eye-witness to the tragedy, and 3) my own fallible memory of the story.  (It is noted that many details in the first two versions differ greatly from each other and from verifiable facts.)

It may also be noted that for some reason, the community recently took Mr. Rabinowitz’s story at face value and added a birth date to a new stone in the cemetery for the acrobat.  The only source of the date was Mr. Rabinowitz’s account.  There seems to be no way to verify that the acrobat would somehow tell strangers his birth date and place of birth but NOT tell them his name.  The birth date makes him 69 at the time of his death.  There is no actual evidence, however, for the birth date.  Fact or fable, the man should be remembered.