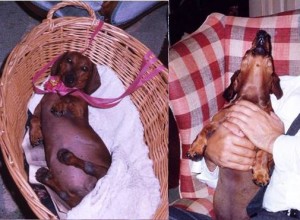 What’s so unbelievable about a dog’s being able to understand the human language?  “Nothing,” my family would be quick to reply.

But what was unbelievable that day to one “member” of our family what what she heard:  her master’s voice pronouncing a death sentence on her.

After ten years of being a vital part of the family, what had she done to deserve death?  Although she was paralyzed and could no longer wag her long body along with her tail, she still looked at her family with adoring eyes.

Now she could not believe her long, floppy ears.  It was now or never.  So she ran for her life.

My family and I had never considered Putzl a dog;  she was so human.  When she cried for her dachshund mother the first night after we brought her home, I put her in bed with me.  There she settled happily with her new mother and accepted her adoption into our family.

Since my husband and our three daughters always protested it was too hot or too cold or too wet for Putzl to stay outside, she lived in the house with us.  She shared in whatever the rest of the family was doing.

When one of our daughters played the piano and we sang, Putzl sang along with us, throwing back her head and swelling out her chest.  Only our complaint was that she sang off-key.

True to her German heritage, Putzl liked her beer and would lap it up with gusto.  We thought we knew all about her until the day we found out she was a “secret drinker.”

One hot, summer afternoon we and our guests were sipping margaritas in between short dips in the swimming pool, leaving our drinks within reach at the side of the pool.  Unwatched by us, Putzl was surruptitiously going from one to another, emptying each in turn.

We were only aware of what had happened when she began staggering and fell into the pool.  After we hauled her out, she lay there, singing her version of a bawdy song, still off-key, of course.

Life with Putzl was a laugh-a-minute affair, as she was a born clown.  Not only could she sing, but she danced and talked as well.  She did a fancy two-step, ending with a twirl when we put her food before her.

If she was displeased about something, she told us so in her not-so-dulcet tones.  She made us “toe the line.”  We had been told that “you don’t own a dachshund;  it owns you,” and we found this to be true.

The day came when romping up and down too many stairs caused one of the discs in her long vertebra to rupture, creating paralysis.  My husband and I rushed her to Texas A & M University at College Station where, we had been told, their veterinarians had performed miracles in such cases.

Putzl was operated on;  the ruptured disc was removed and the others fused together.  We were promised nothing, but we were hopeful.

Then began the long, arduous period of rehabilitation after we brought her home.  Twice each day I put Putzl into warm water in my bathtub and gave her hydrotherapy, moving her useless hind legs up and down to exercise them.

My husband devised a contraption with two wheels to take the place of her hind legs, which he strapped on her;  but she refused to accept such a prosthesis.  She did condescend to let him take her for walks, however, as he held up her hindquarters with a towel.  She could still chase squirrels in this way, dragging my husband behind her.

Despite all our efforts, time took its toll, and Putzl grew progressively weaker.  Her paralysis caused a kidney failure, and bedsores began to form over her body as she lay in the baby playpen where we tried to make her comfortable.

She was begging us to do something for her.  There seemed nothing we could do.  We had already carried Putzl to Memorial Hospital, where the radiologist, a friend of ours, had taken her into the room where human patients are X-rayed and had taken pictures of her spine.  He told us nothing could be done for her.

We had also carried Putzl to a local veterinarian, and he had concurred with the radiologist’s diagnosis.  So, he suggested putting her to sleep as the only humane thing to do.

We had rejected the veterinarian’s suggestion, but as Putzl’s condition became worse and worse, we were forced to reconsider his recommendation.  Discussing the idea one day, we forgot that Putzl was in the room.  After reluctantly agreeing that putting Putzl to sleep was the only thing to do, my husband told me he would have it done after he returned from a business trip to Washington, D.C.  Since he was learing for Washington that day, my husband took Putzl for a last walk before he left.  They started out, my husband holding up her hindquarters with the towel.  However, when he happened to drop the towel, Putzl suddenly took off running, her hind legs working in unison like a rabbit’s.  And she didn’t stop until she had run nearly a block.  Apparently Putzl had realized it was “now or never” to prove that she was not yet ready for the death sentence.  And she proved it.

Putzl, it turned out, had several good years left in which to chase her squirrels, to entertain us, and to lead the “good life”…And, her peculiar gait didn’t seem to slow her down.

She has since passed to her reward but I am sure she is still singing off-key and dancing for St. Peter, while she waits for her family to join her.

(note from daughter:  Since she wrote this, both she and our dad have “joined” Putzl.  Putzl’s wait was worth it.)