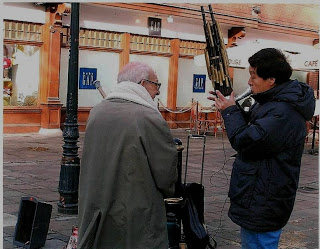 Sometimes, even a small moment makes a difference.

It was bone cold, the wind sending chilly gusts around our legs and up loose backs of our jackets.  I pushed my muffler up to warm my nose.

We were three American visitors steadily working our way through the quaint streets of Canterbury, one of England’s most famous places.  We wanted to see as much as possible during the scant daylight hours of English winter.  In the waning day, people headed this way and that carrying parcels of holiday shopping.

We hadn’t come to shop and rain was threatening, so we hustled toward the center of the city to see historic Canterbury Cathedral, where Sir Thomas Becket had hoped to find safety from the vengeance of a king so many years ago.  Two knights had been confident they were doing the bidding of Henry II and killed Archbishop Becket next to his altar, inadvertently creating in the process a saint.

After spending time in the cathedral amid such resonant history we returned to the old streets in search of a warm spot to perhaps have tea and shake the chill.  The day was fading quickly.

We began to hear faint exotic music coming from the direction we were walking.  When we rounded a corner into one of the city walking centers, standing near an ancient fountain was a man playing a most unusual instrument.  It looked like a clump of tiny pipe organs jutting up from a bowl he held in his hands.  The music was beautiful, but more than that, the combination of the lilting oriental melody and the ancient stones and twinkling holiday lights around him gave the setting a magical quality.  The music-maker was wearing a puffy blue parka with its hood slung back.

Beside him was a small pile of CDs for sale on the stones with a payment box.  A group of people stood to listen.

We paused as his haunting music flowed all around.

I noticed an old man.  He was wearing a tattered raincoat with a bath towel draped around his neck as a scarf.  He wore large horn-rimmed, thick glasses and had on what appeared to be soft house shoes.  His coat swung open to reveal discolored, mismatched clothing.  He wore no hat and his wispy white hair stuck out in odd areas.  In one hand he held a curved wooden cane with a rubber tip at its base.

The small audience seemed disturbed by the intrusion and backed away from him.  The old “violinist” neared the musician, bowing enthusiastically at his invisible instrument and singing in a voice that jarred with the tunes coming from the musician’s mouth organ.  An expression of pure joy was on the old face as he rocked back and forth.  I wondered how the musician would react to having his performance interrupted.

Instead of avoiding the old man or shooing him away, the musician continued to play his exotic, reedy, haunting music, moving even nearer.  Then he lifted his own instrument onto the old man’s shoulder, very close to the ancient violinist’s ear.  They swayed like that, gently, together in a friendly duet.

I stood for a while watching this moment of grace.  Then, being drawn by our small party and the chill, I left, but not before quietly purchasing one of the musician’s CDs.  The lilting music trailed and faded behind us.

Sometimes, the most beautiful music is made through simple generosity and compassion alone.

Note:  The artist’s information is taken from the album I purchased, “The Honglou Dreams”: Wang Shun Xian – Former soloist for the China National Film Orchestra.  He comes from a musical gifted family.  His father taught him Chinese instruments from a early age.  He started his soloist career at 13.  He plays various Chinese instruments such as Dizi (Chinese flute), Sheng (Chinese mouth organ), Suna etc.  He has won many national music awards and recorded more than 80 soundtracks for film and TV programmes.  He also represented the country on tour to Europe and Singapore.