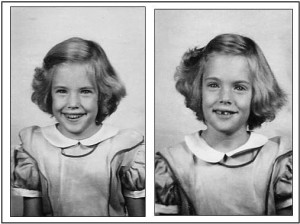 Being a twin, an “identical” twin is something I have always taken for granted, like having two arms, two feet, two parents. There have always been two of us, or … me..and another me. It was not until a school photograph that I really got what it meant not only to be a twin, but also what it meant to be “compared,” me to me.

On that second-grade-7-year-old school picture day, Mama had dressed us in our “Alice in Wonderland” blue dresses with the round “Peter Pan” collars and the crisp white organdy aprons with red piping. She had made them for us, as she did most of our clothes, and carefully ironed them. Our hair was another issue entirely. Our grandmother, Nannaw, would periodically take us (without our mother’s prior knowledge) to have our hair “fixed” at the Blue Bonnet Hair Salon, in a converted garage across the street from our great-grandmother’s house. I suppose it was dismaying to both the shop’s owner Mrs. Fry and to Nannaw to see our stick-straight hair when they so loved curls. And….they certainly had the equipment there at the Blue Bonnet to remedy God’s “mistake.” There, among crowded hair “fixing” equipment, Nannaw would have Mrs. Fry cut off our hair then give us a chemical perm. When the tiny plastic curlers were wound in our hair, doused in acrid solution, we would have each curler clipped to a spring extending from an evil looking contraption over our heads. Then, after being properly singed by the contraption’s heat, Mrs. Fry would rinse out the smelly stuff in our hair and “style” our new short curly hairstyles.

Nannaw would then proudly take us home to Mama, expecting huge gratitude from her for making her daughters beautiful…and not incidentally, paying for it. I don’t exactly know how Mama hid her despair from her mother-in-law, but she must have since Nannaw did us that “service” many times. Mama later said she just sat down and cried after Nannaw left.

And so it was that the tight chemical curls had begun to grow out by the time the school photographer came to Robert E. Lee School for the annual photographs, leaving odd-looking grown-out straight hair with wiry ends. I had also already lost a front tooth. My twin followed later, but not before the photograph day. The packets containing the sets of photos came about a month later and were dutifully passed out by our teacher. The big envelopes contained a sheet of two 5” x 7” pictures and a sheet of wallet sized “trading” copies.

Mama had told us to NOT cut them apart until she and our dad had seen them; to just bring them home. Naturally, everyone wanted to see each other’s pictures. I didn’t have any trepidation about showing them around until I heard my sister’s voice saying to one of our friends, “Wait till you see HER pictures. They’re horrible.”

It suddenly occurred to me that maybe they were “horrible.” Were they? I looked at them again. Others were also looking – and laughing. Huh? I looked just like my twin. How could I have a “horrible” picture when she didn’t? My face red, I put them face down on my desk.

I defended the photos the rest of the hour, firmly holding the packet to the desk top. When the bell rang for the end of school, the noisy bustle of seven-year-olds gathering their things distracted attention from the shameful envelope. Waving to our friends and uncharacteristically quiet, the two of us, dressed alike, started walking the four blocks home along the south side of Third Avenue, my photo packet’s glassine window turned inwards, hugged against my chest with both arms.

The routine of the familiar walk helped heal my wounded ego, but when I got home and Mama reached for our picture packets with her cheery, “Oh, let me see your pictures, girls,” I again sank into embarrassment. Hoping against hope that she would magically make my picture pretty, I was acutely aware of the fall in her smile when after looking first at my sister’s happily offered photos, she slid my “horrible” pictures from the envelope. Glossing over her disappointment and regaining her smile, she kissed us each and told us how beautiful we were.

If that had been the end of the school picture debacle, it would have had little significance in my memory. Instead, the horrid photograph kept popping up over the years with such familiar comments as, “Wait till you see her second-grade school photo.” The picture wasn’t just bad, what made it so to me was that it was the same person, practically, in the other “good” cute photo, but my “bad” photo person wasn’t cute at all. Hmmm. What did that mean?

Pondering on and off over the years, my thoughts brought revelations of different-ness to my life, of comparison. I began wanting to dress differently from my twin, wanting to be in a different class, indeed wanting to be… just different, un-comparable.

A few years ago, my twin now living half a world away, I began writing about our family, primarily to preserve family history for my children and grandchildren, my interest in genealogy being sparked by the waning of my days and what all that means. Having been through box after box of family keepsakes, albums and photographs, I realized that the “horrible” photograph that had such impact in my childhood wasn’t among the images. Oddly, my sister’s second-grade picture was there, which had reminded me to look for mine.

The next time I spoke with her by telephone, I asked her about the photos. Her answer stunned me. She said she had the two photographs framed together, side by side, in her bedroom. Huh? Why? The pictures had obviously had great significance also to her.

She sent me scans of the two photographs and I again (again!) felt that flush of embarrassment when I opened the file. Should I just “delete” the photos? Would that forever erase the shameful image? No. It was after all just a second-grade photograph of a Texas woman who had lived 60+ years beyond the meaning of the picture. But why did my twin sister still have the old photos in a place of prominence in her present life? To me, my struggles with twinhood were always about being different, being an individual not half of a whole or the exact same as someone else.

To her…….….maybe it was just about being the best twin.