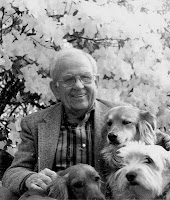 A large, old black dog showed up on my sister Joanne’s doorstep, thirsty and hot.

The owner of eight dogs, she took pity on the old dog, who wore no collar or identifying tags.  She ushered him inside, gave him water and a bath and called him “Joe.”

Joe immediately made himself at home.  Amidst the clamor and busy movement of the other resident dogs, Joe sat calmly with what looked remarkably like a smile.

Eventually, his owners were found and Joe returned home.

He came back to Joanne’s about a week later and waited patiently on the porch to be let in.  He seemed happy to once again join the household.  It was then that I met Joe.  He was such a sweet gentleman that I immediately loved him, too.

Of course, his owners were again called and came to collect him.

Some days later, Joanne and I were driving back from lunch and saw Joe wandering, muddy and thirsty, a few blocks from her house.  We put him in the car and took him back to her home.  She once again bathed him and he settled into his familiar and comfortable routine.

What I noticed was his seeming efforts to stay out of the way and make his body as small as he could.  We agreed he was trying to be small so he wouldn’t be any trouble and could stay.

Of course, Joanne called his owners and they again came to get Joe.  We sadly watched him leave, knowing he might be back but hoping he was loved enough to be kept safely at home.

Joe’s behavior reminded me in a way of our father, who lived with my family for almost ten years after our mother’s death.  He and his own two dogs lived in the guesthouse at the back of our driveway.

Our household was a busy one with three children, exchange students and animals.  In the turmoil, Dad seemed to make himself fit-in the way Joe did.  He cheerfully helped out around the house and offered to run errands we needed, including picking up the kids at school.

The tales of those sometimes harrowing drives are now part of our family’s collective memory.

Weekdays, I worked at the animal shelter and appreciated enormously Dad helping me with the eleven dogs and two cats at our house during the part of the day when no one else was there.   Just one old man and the thirteen friends who adored him as much as we did.

Joe, whatever his downsizing efforts, could never become small.  His gentleness and size were ever evident when he was in the room.  Dad, no matter his own “small” efforts, also could never have been small in our lives.  He was an integral part of raising the children, sharing our sadnesses and joys and being a reliable oak in our family forest.

He grew elderly but, always smiling, retained his youth in spirit and memory.

When I was young, I thought our 5-foot-9-inch father was ten feet tall in his cowboy boots and Stetson.  He certainly stood even taller in my mind when he took care of some problem I considered catastrophic.

I remember vividly when I, as a teenager, had a difficulty with a merchant downtown.  When I tearfully told Dad, he took my hand and saying, “Come with me,” marched purposefully back to the store.  I looked up at him, congratulating myself on having such a father.  He might well have been a knight on a huge horse in full armor, off to slay dragons and vanquish problems.

In my youth, I thought things had to be “perfect.”  I have since learned, painfully at times, that little in life is perfect.  There are, however, a few perfect times.  I was lucky in my youth to experience many such times.  Those times made up for the difficult ones.  I was lucky to be young in the forties, fifties and sixties when life seemed so much simpler.  Lucky to have parents who loved each other and their children.  Lucky to have two healthy, happy sisters, even when we didn’t get along.  Life gave me more than my share of good luck.

I owe a huge portion of this to my “knight” who lived “large” with us in the little house out back.  Thank you, Dad.

(This story is dedicated to our much-missed father and grandfather, James Tinkle West.  1915 – 2002)