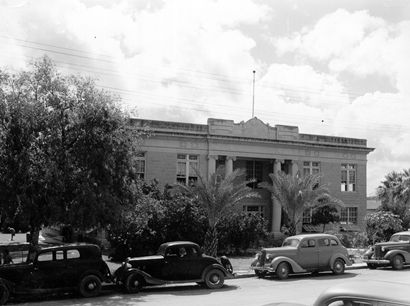 Texas has always remained close to its Mexican heritage. Just how close that can be in some of the most southern of our 254 counties can at times bewilder even a fellow Texan from a more northern county.

Dimmit county is one of the most southern counties. The name, as I understand it, was meant to honor a Pennsylvania adventurer named Phillip Dimmitt who fought for Texas’ independence from Mexico. Dimmitt had gone unheralded and unrecognized for his brave deeds, so someone decided to correct the oversight by naming a rural, rather unpopulated county after him. However, no one could remember how to actually spell his name, so Dimmit it was…and still is.

Ironically, the independence from Mexico Phillip Dimmitt fought for so valiantly has slowly been diluted in his namesake county until today he might well wonder if it was worth the trouble.

The Dimmit county seat is Carrizo Springs, a Mexican name for the reeds surrounding the natural springs there.

Over barbecue one day, a friend, Dave Ralston, one of Navarro County’s most respected attorneys and a great teller of tales shared a story with us. In his 54 plus years of experience, Dave served as county judge and city attorney as well as maintaining a busy private practice, so he certainly knew the law and how to navigate complicated legal situations. He had traveled to distant Carrizo Springs for a hearing on a motion he had filed to transfer venue (or location of the case) to Navarro County.

When Dave entered the Carrizo Springs courtroom however, he knew there was a problem. No one, the bailiff, attorneys, secretaries, spectators, or the judge…no one was speaking English. They were all conversing vigorously in Spanish. Dave, whose command of the Spanish language was limited mostly to menus, waited for the proceedings to make sense to him. Eventually, he heard words that he recognized, the name of his case being called. He put his head down, strode to the counsel table and prepared to plead his motion to the judge. He unpacked his briefcase and laid out his papers. Then, waited.

The rapid-fire Spanish continued, but eventually Dave again heard his case title mixed in among the Spanish. The judge glanced at him. Dave rose to his feet. “I object, your honor. It’s my understanding that the rules of procedure require proceedings in courts in the state of Texas be conducted in English.”

The judge looked over his glasses at Dave. “Mr. Ralston, this is my court and I will conduct proceedings in my court in any language I choose. And I choose Spanish. Sit down, Mr. Ralston. I’ll tell you if anything important happens that you need to know. In English.”

So sit he reluctantly did, while opposing council, the judge and several others argued vociferously and interminably in Spanish. (He wondered absently if he should have taken a Spanish class in school.) From time to time, they glanced in Dave’s direction but other than that appeared oblivious to his presence. Dave raised a finger once, but the judge stared it down.

Leaning toward Dave, the judge said, “See, Mr. Ralston. I told you I would let you know if anything important happens that you need to know. In English.”